As of 7/16/1977. Thomas R. York, New York, is a senior vice president, director and manager of the Money Market activities of A.G. Becker. He joined the firm’s Commercial Paper Department in 1965 after three years in the Government Bond Department of Bankers Trust Co. Tom received a B.S. degree from St. Peter’s College (1955).

Tom York worked closely with Jack Donahue for a number of years to build Becker’s Credit Securities business into the powerful dealer and distributor of a wide range of credit securities that it became before the sale of Becker to Merrill in 1984, this business and the organzation which conducted it being the major asset in that sale.

Tom left Becker in 1984 to join Security Pacific’s NY Bond Department for about a year and then moved on to manage the FNMA and Mortgage Bond operations at Bear Stearns, retiring from there in 1999. 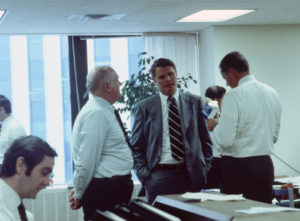