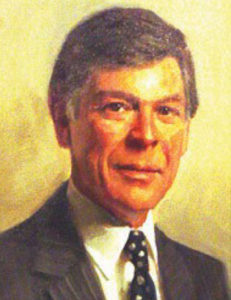 John Heimann was born in New York City in April, 1929. He received his AB from Syracuse in 1950 and became a union organizer. Later he joined Smith Barney from 1955-66, became a vice-president, and developed the firm’s union pension fund investment management business. Later from 1967-75, he was Senior Vice President of E.M. Warburg. Pincus & Co. He then served as superintendent of banks for New York and became commissioner of housing and community renewal. In 1977, he became the U.S. Comptroller of the Currency. Heimann joined WPB-AGB in July, 1981, in connection with the resignation of Ira Wender, Heimann became Co-Chairman of AGB-WPB. After Paribas obtained total ownership of the Group, Heimann became Deputy Chairman under Herve Pinet, Chairman. Heimann then participated in the sale of Becker to Merrill Lynch and the dispersion of the balance of the organization. Heimann became a Vice-chairman of Merrill Lynch’s Capital Markets division. Subsequently, Heiman has served in various capacities for a variety of national and international for profit and not-for-profit organizations.