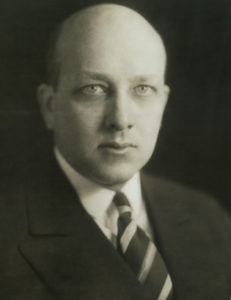 Howell (Howie) Murray was born in 1890. He graduated from the University of Chicago in 1914 and joined Becker in 1916. He was elected a Vice-President in 1925. He worked initially in the commercial paper business, alongside A.G. Becker and Robert Schaffner, and then later in general sales, especially bond sales. He was active in new business development and a director of a number of companies. He was a Trustee of the University of Chicago, and of Carleton College, Northfield, Minnesota. He was chairman of the Ravinia Association, a member of the Orchestral Association, a trustee of the American Library Association, and active in a number of non-profit organizations in Highland Park, where he lived. He died in 1958.

Obituary:
Nov. 28, 1958. Chicago Daily Tribune. H.W. Murray of Investment Firm Dies at 67. Howell Worth Murray, 67, a senior partner in the investment banking firm of A. G. Becker & Co., Inc., 120 S. LaSalle St., died of a heart attack Thursday night at his home 1981 Linden Avenue, Highland Park. Mr. Murray, a long time supporter of education, cultural and civic activities, had been chairman of the Ravinia Festival Association since 1949, and a member of the executive Board 23 years. He also was a member of the Orchestral Association. Howie was a trustee of the University of Chicago and of Carleton College, Northfield, Minn. During World War II he was chairman of the Illinois Citizens committee of the Greek War Relief association and in 1944 was Vice Chairman of the Community and War Fund Campaign. Mr. Murray led the fund raising for the expansion of Highland Park Hospital in 1960, and was chairman of a committee that established Chi Psi fraternity’s educational endowment fund. A graduate of Hyde Park High School and the University of Chicago, Mr. Murray has been associated with A.G. Becker & Co. since 1916. He was survived by his widow, Elizabeth; two daughters; nine grandchildren. Mr. Murray’s only son died in a naval accident in 1944.