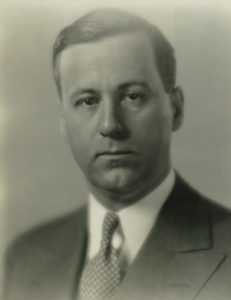 Francis Patton was born in Grand Rapids, Michigan, in December, 1887. He graduated from the University of Chicago about 1910 and joined Halsey Stuart in Chicago. Later, in 1910, with “Junie” Johnston and their manager, Jay Buck, the three men went over to A.G. Becker, possibly in part recruited by A.G. Becker himself. Later, Patton became sales manager. Patton experienced the great crash of 1929. As noted in the Chronicle, Patton became highly involved in securities industry affairs, particularly in the mid- to late-1930s with the passage of the national securities laws in 1933 and 1934. Patton was an officer of various securities industry groups, national and local. He apparently retained and serviced a number of personal accounts all through these periods. He retired to California in 1948 after having been only briefly a Becker partner/shareholder. For a short time, starting in 1951, Patton was an account executive in the La Jolla office of Merrill Lynch. Patton returned to Chicago in 1957 and died in 1962 at the age of 74.

Obituary:
Chicago Tribune, May 5, 1962. F.F. Patton, 73, Securities Broker, Dies. Francis F. Patton, 74, of the University Club of Chicago, investment securities executive and retired vice president of A.G. Becker & Co., Inc., died yesterday in his quarters at the club. He was the son of the late John Patton, former senator from Michigan. Survivors included his former wife, Dorothy; a son; a daughter; and five grandchildren.