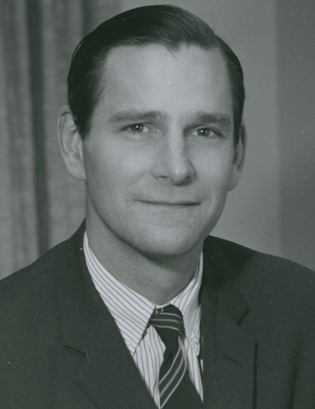 As of 7/16/1977. Charles (Soapy) H. Symington, Jr., New York, was born in Baltimore and raised primarily in Michigan. He is a managing director and director of Warburg Paribas Becker and serves as the firm’s senior syndicate officer. Before joining the firm in 1975, Charlie was executive vice president and treasurer of G.H. Walker, Laird, Inc. He is a graduate of Williams College where he received a B.A. degree (1953) and received his L.L.B. degree from Harvard Law School.

Soapy joined Becker as a Senior Vice President in 1975 to take over as chief industry relationships/syndication officer. He was a member of various clubs. He handled the syndicate job with great professionalism, drawing the most out of his colleague, Lon Moellentine. It is not known when Soapy retired and the course of his career thereafter.

Obituary:
New York Times, March 8, 2009. Charles (Soapy) Harrison Symington, Jr. died Wednesday morning, March 4, 2009 at Memorial Health University Medical Center in Savannah, at the age of 78. He was survived by his widow, Bailey: two daughters; a son, and five grandchildren; and a number of nieces, nephews, in-laws, and cousins. 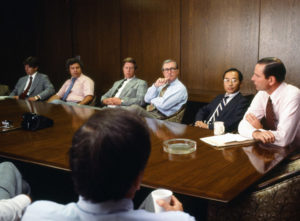